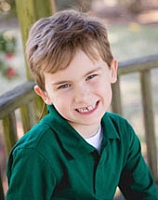 Carey, born in December 2009, is a charismatic, talkative, energetic child who enjoys watching television and swimming. Carey is in constant motion and requires a great deal of redirection and attention. Carey loves dinosaurs, especially the T-Rex! He also likes cars, trains, and to draw and color. He is in the 1st grade for the 2016-2017 school year and his favorite subject in school is Music. Carey wants to be a Ninja when he grows up because he wants to fight bad guys. Carey tries hard in school and benefits from extra accommodations in Math but is still in need of a great deal of support heading into the next school year. Carey states that he is most proud of winning a medal from playing soccer. Carey enjoys lots of attention but needs help in maintaining appropriate boundaries and controlling his emotions when he cannot get his way. Carey's favorite holiday is Halloween because he likes to dress up. He would love to visit Disneyworld one day and his ideal birthday party would be at Chuck E. Cheese. Carey's favorite restaurant is McDonalds and his favorite foods are chicken nuggets and French fries. Carey would do well in a home as an only child. He will needs parents who are flexible and available to meet his daily educational needs.