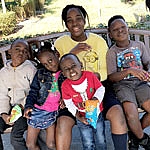 Daryn is an African American male child. Daryn can be described as being playful, happy, shy, fearless, extremely caring and honest child. He is often quiet and stays to himself. He enjoys playing by himself and not being the center of attention. He looks to his brother for guidance and sometimes approval. Daryn enjoys playing football, basketball, video games, watching movies, dancing and telling jokes. Makayla is a 12 year old African American female child. Makayla can be described as a very loving child who can become easily attach to anyone. She enjoys playing the mommy role to her siblings. Her siblings all look to her for guidance and approval. She is also very helpful and always willing to lend a helping hand. She can also be described as reserved, polite and mannerly. She enjoys the normal pre-teen girlie things such as getting hair done, manicures/pedicures, wearing fashion jewelry and other girlie things a normal 12 year old pre-teen would enjoy. Her likes are listening to music, dancing, singing, watching movies. Devon is an 8 year old African American male child. Devon can be described as being a playful, energetic, out spoken, fearless, loving child. Out of all his siblings, Devon can be described as being the brave one out the bunch. He expresses himself with great confidence and is not afraid to be himself. Devon loves to be the center of attention. He enjoys football, basketball, and video games. He can also be comedian at times. He has a very close relationship with Daryn who is one year part from him. He knows that Daryn seeks approval from him and looks up to him. Devon takes his big brother role very serious and is very protective of his siblings. Devanique is a 2 year old African American female child. Devanique can be described as often shy, quiet, caring, happy, honest child. She has a very close connection with the youngest sibling Daryl. She takes her big sister role very serious and loves to direct Daryl when he does something wrong. She enjoys playing with dolls, watching movies, and playing with her siblings. She is always happy and loves to laugh. Daryl is 1 year old African American male child. Daryl can be described as very energetic, playful, talkative, boisterous, brave, happy, loving child. He enjoys playing with his siblings. He is always happy and full of life.