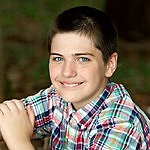 Anthony is an intelligent young man with a wide variety of interests and a slant towards introspection. He is an avid reader, a competent chess player, and conversationalist. Currently, his favorite book series is ?Harry Potter?. Despite these traits, he is very much an active person and enjoys sports, particularly football, and is an enthusiastic follower of the Pittsburgh Steelers. A solid performer in school, Anthony enjoys learning and is open to being challenged subject-wise, as he can sometimes become bored in the classroom. He prefers science classes. In the past, he was in his school's band and has expressed an interest in doing so again. Following high school, Anthony would like to attend Michigan State. He states "I want to be an ornithologist because of my love of birds. I'm thinking I'd like to focus my studies on owls. I love all birds, but I do have a thing for raptors and I'd like to own a falcon when I'm an adult. Five years from today, I'm hoping to be deep in my studies and maybe living in a dorm on site or a small apartment. I guess I'd need a car, but I don't care for a crazy dream car, I just want something reliable and that has good gas mileage". As an adult, Anthony has stated that he would like to be a football coach and do a bit of travelling. When asked what his dream vacation would be, he stated ?going to the Gold Coast in Australia?. Lately, in his free time, Anthony has been writing poetry. He says that his ideas aren't based on topical subjects, but on the thoughts and fantasies he imagines. One of his longer poems "The Peace Treaty" has been committed to memory. Unlike a lot of other writers, Anthony is not shy about his writing and will speak about, and share his writing with others. Anthony is legally free for adoption.
Advertisements
Host: stg.adoption.com