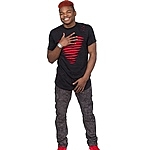 Meet Isaiah, an impressive young man who speaks his mind honestly and openly. He describes himself as a calm person who would not do anything to hurt anyone. He also enjoys having fun and helping others. His friends describe him as funny, calm, and outgoing (sometimes). When asked how adults would describe him, he stated it would depend on who was asked because different adults would say different things. Isaiah enjoys karate and other martial arts, bowling, skating, and hiking. He also enjoys hanging out with friends or watching television and movies, mostly comedies. His favorite actors include Will Farrell and Adam Sandler. He finds their awkward moments, facial expressions, and comedy hilarious. He enjoys listening to music such as country, pop, and oldies. He does not like rap music, as he believes it is too violent. Isaiah takes hip-hop dance lessons and would some day like to take ballroom dancing. He's in high school and his favorite subject is science. His least favorites are reading and math. His goals are to attend college or a tech program. He desires to help kids somehow, possibly as a teacher. He had difficulty identifying three wishes because he has lots of wishes. He finally said these three: I would like the whole world to be calm and peaceful, where everyone gets along and there is no fighting or people shooting others. I wish there would be no such thing as money because it causes too many problems. I wish rap music did not exist, because it causes problems and the themes are all about drugs, violence, and other bad stuff. Isaiah is open to any type of family, any race, and any location. He loves animals and would like his family to have a pet. He prefers dogs, as they have lots of energy and he can play with them. He would like to have younger siblings because he believes he will be a good big brother. He would like his family to spend time together as a family and do different things such as going out, taking nature walks, and possibly traveling. He would like his family to have family time at least 1-2 times per week. He enjoys attending church; however he is okay with a family who does not attend. In the past, he has helped and volunteered to teach crafts to younger kids at church. Isaiah is free for adoption. To learn more about Isaiah, please watch the documentary #MeetTheKids at www.Youtube.com/adoptpakids.
Advertisements
Host: stg.adoption.com