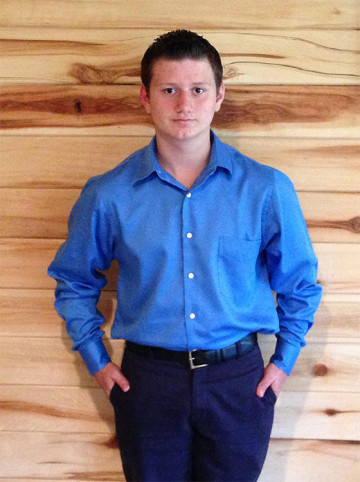 Alexander ("Alex") is a great youth who enjoys school and learning. Although he can be quiet and reserved at times, he is very polite and somber. Alex is interpersonally skeptical and submissive and will typically follow others' lead. He really enjoys math and science. Learning about other cultures and traditions is also very exciting and he can even write his name in Chinese. Alex would love to be able to travel and learn more. He enjoys being outside and playing football, basketball, and volleyball. He would love to be able to play on a football team and have parents stand by the sideline cheering him on. Alex also likes hunting, fishing, and riding dirt bikes. Some of his favorite foods include pizza, hamburgers, and Taco Bueno. He is described as being honest and straight forward. Alex likes discussion and asks a lot of questions. He is a compassionate youth who exhibits empathy towards others and enjoys forming relationships. Alex is realistic and has strong coping skills. He will flourish in an environment with consistent boundaries, while also fostering his desire to learn. Alex has a brother (Trenton, TARE ID# 77202) who is also available for adoption and who would like to be adopted with him. Although Alex is being recruited for individually, the hope is that his forever family will adopt both of them together. Alex enjoys being with his brother, although they sometimes argue and often seek out validation of their own point of view from adults.

Alex is ready for his forever family! He will thrive with parents who provide him structure and consistency in a calm reassuring manner with a lot of love and encouragement. He may require frequent reminders about behavioral expectations and warnings for inappropriate behavior. Alex will respond best to parenting approaches in which behavioral goals and expectations are clearly defined and consequences are consistently applied. A family who is active and participates in sporting events with Alex will be the best fit. He will greatly benefit from a family who will keep his mind engaged as well as continue to encourage and praise his academic success. Additionally, Alex has a strong desire for an established father figure who will play sports with him. He would love a family who will care for his well-being and provide him and his brother with a sense of belonging. Alex has a brother (Trenton, TARE ID# 77202) who is also available for adoption and who would like to be adopted with him. Although Alex is being recruited for individually, the hope is that his forever family will adopt both of them together.