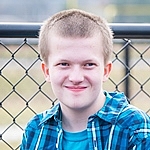 Zackary is a very enthusiastic and fun young man. He loves hands-on activities such as arts and crafts, and you can often find him drawing, coloring, or playing with robot collectables. He also loves to build things and talks about creating his own robot one day. Zackary likes to be fashionable and would like potential families to know he is currently exploring his gender identity. During the summer, Zackary enjoys being outside and swimming. Most recently, Zackary has taken an interest in colossal squids. His most frequently used coping skill is going for walks. He is very caring towards younger children, often looking out for them. Animals are calming for Zackary. He would love to spend a day at the zoo with you! Zackary is enthusiastic about finding a family. He is looking for a one or two parent family who will be committed to him through adulthood. One parent should be available to care for Zackary while he is not at school. Zackary would be thrilled to have siblings or pets. Zackary is legally free for adoption.
Advertisements
Host: stg.adoption.com